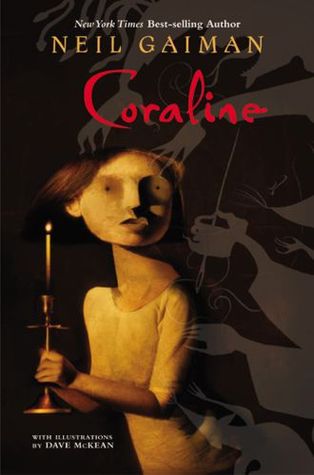 When Coraline explores her new home, she steps through a door and into another house just like her own – except that things aren’t quite as they seem. There’s another mother and another father in this house and they want Coraline to stay with them and be their little girl. Coraline must use all of her wits and every ounce of courage in order to save herself and return home… but will she escape and will life ever be the same again?

Elsewhere in this collection, a sinister jack-in-the-box haunts the lives of all the children who ever owned it, a stray cat does nightly battle to protect his adopted family, and a boy raised in a graveyard confronts the much more troubled world of the living. From the scary to the whimsical, the fantastical to the humorous, Coraline and Other Stories is a journey into the the dark, magical world of Neil Gaiman.

I have to admit that I’m a bit scared after reading this book. I have found a new favorite author.

There are few times when a book makes a big impression on you, let it be in any moment in your life. This book is definitely staying with me for a while, I can feel it. A short yet extremely amazing scary story for all ages. You can’t be too old or too young to read this masterpiece.

While exploring her new home, Coraline meets the weird neighbors with which she shares a big house divided into flats. Everything seems boring and Coraline spends her first days there exploring before school starts. But while in her adventures, she discovers a door in the drawing room that is closed by a brick wall. When she opens it a second time while her parents are away, she is met by a different yet really alike world to her own. She has other parents who claim that will love her forever and always, making each new day an adventure for their loving daughter, but only if she sews two black buttons to her eyes. When she rejects this to her other mother, the real parents are taken from Caroline and the only way to bring them back, and free the mysterious three ghost children, is by challenging the other mother,  who each moment looks less like her mother and something more sinister.

I had picked this book in an attempt to not read any ARCs, to read something because I simply wanted and without the obligation of anything, like the old times before a blog and such. A light and interesting read was all I wanted. I wasn’t dissapointed. Some people must have seen the 2009 movie of the same name, at least I did before I even knew it was a book. I completely loved it and was even more excited to read the book to be met by such a mysterious and astounding plot.

In terms of comparing it to the movie, it actually stuck to be really alike, except for a few things and characters that were probably added for more movie-ish things. The book’s  plot didn’t fail to keep you constantly guessing, even if you knew some things from the movie. I didn’t remember much of it so it helped me to be all suspicious of the other mother’s actions. The writing style of Neil Gaiman made it even better, simple yet effective to make your hairs stand up in your arms. It didn’t help that I read most of this book at night, like really late at night. There were some things that were simply creepy and disgusting in an enjoyable way because it gave a more realistic feeling to the book.

The characters, how do I express myself into telling you how much I loved each one of them? As simple or temporary as they were, each played an important paper in the story, either for the plot as it is the other mother, Coraline, and her parents and ghost kids, or even Coraline’s own neighbors (the real ones). They teach Coraline a lesson of life and subconsciously help her through her quest against the other mother.

That’s an example of how evil the other mother is. When I read that part I felt the chills running up and down my spine, I got goosebumps, and had to stop reading all together, gasp, and say “damn.” As evil as she was, she was greatly developed. We don’t know what she was in the end, so I suppose it as all part of the mystery of the book to let you thinking what it was. Was it an illusion? A big evil humanoid spider? A witch?

My other favorite character was the cat with his sarcastic and sassy remarks towards Coraline. He felt really real and was a great addition to the book.

“We… we could be friends, you know,” said Coraline.
“We COULD be rare specimens of an exotic breed of African dancing elephants,” said the cat. “But we’re not. At least,” it added cattily, after darting a brief look at Coraline, “I’M not.”

And obviously, I loved to bits Coraline. Stubborn, adventurous, brave, independent, and a fighter, she was amazing for this book. She’s exactly how I imagine kids to be, free and curious, yet they can be responsible, sensible, and cunning when needed to be. She was wise beyond her years (even is it’s not explicitly mentioned) and it’s all expressed in ways for kids to understand, and in ways that stick to your brain.

A great read you’ll probably won’t regret, honestly. I was so obsessed with knowing what would happen next, I was even reading between classes and in the classes, even if it was just a page. I was even making my friends crazy showing them interesting quotes or even the creepy and great illustrations by Dave McKean, which is a friend of the author. Those added more to the scary vibe of the book.

Another thing I liked was that my version of the book had some bonuses like an author interview, pages from the original writing the author made, and such. With the interview I got to know more about Neil Gaiman and was impressed at how… simple and amazing he sounds, and to know he’s a best-selling author of such great books, wow. We get to see more into what’s behind the story of Coraline and what is from his life in said story. I particularly liked this he said in the end:

“It was a story, I learned when people began to read it, that children experienced as an adventure, but which gave adults nightmares. It’s the strangest book I’ve written, it took the longest to write, and it’s the book I’m proudest of.”

Not only has the story inspired me to write, but his words and experience with the creation of Coraline are inspirations for writers of all kinds on that not all great stories are made in a rush or in a year. They can take even more than five years, with the slowest of progressions, and be a memorable piece of writing to stay in the hearts of all who reads it. At least now my mom won’t say I never finish writing anything, because Neil Gaiman took quite a while to write this.

Now, go buy or ask a friend for this book. Go go go. Don’t let much time pass until you sink your teeth into this. Preferably at 12 am for a more spookier feel to it. I guarantee you’ll love it, no matter what age you have.

(Sorry for such a long review xD)