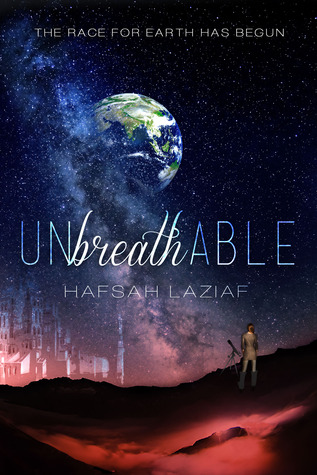 Goodreads Summary: One hundred and fifty years ago, Earth was destroyed, and the remaining humans fled to the dusty red planet of Jutaire, where the only oxygen is manufactured, food is scarce, and death strikes often.

When Lissa’s father discovers Earth still exists, she accidentally inhales the toxic air of Jutaire, and in one breath, discovers she isn’t quite human.

Her father hangs for his discovery, and Lissa knows the Chancellors will come for her, for she saw the Earth that night too. With nothing to lose, she sets out to expose the truth. It isn’t long before she meets Julian, a beautiful boy who can breathe the toxic air like she can – and shows her that the Jute, the original inhabitants of the planet, are more tangled in their lives than she knows.

But the Chancellors are only pawns in a greater game – one where the Jute control everything. Worse, the Jute plan to leave Jutaire for Earth, but to get there, they need her. And they’ll stop at nothing until Lissa is in their clutches, even if they kill every human in the process.

The race for Earth has begun.

“And you? What do you want?”
I drop down beside him and think, closing my eyes. In the darkness of my closed eyelids and the hushed silence of the night, I see one object.
Round and green and white and blue.
“Earth.” My voice is soft. I turn in time to see something flicker in his eyes. “What about you? What do you want?”
He meets my eyes. Intense. A million words in one penetrating look.
“You.”
–Unbreathable by Hafsah Laziaf

This book is much more than a pretty cover. It’s a sci-fi based story about a girl who lives on the planet Jutaire, 150 years after the earth was destroyed. Then, one night, Lissa discovers that Earth wasn’t destroyed after all. And, after inhaling Jutaire’s toxic air and surviving, she realizes she isn’t human either. A beautiful boy named Julian who can also breathe Jutaire’s air helps her discover that she holds the key to bring the humans back to Earth; there’s only one slight problem: The Jutes also want Earth, and will stop at nothing to get it, even if it means destroying Lissa.

I really enjoyed this book. I found the writing to be a bit simplistic, but I understand it because it’s told from a first person narrative, which makes it sound much more believable.

Anyways, ever since I started this book, I knew I would like it. The book sticks to the premise, adds wonderful twists and turns, and adds swoony and forbidden romance along the way.

Lissa is the protagonist here, and at first I really didn’t connect to her. I was mad at her for being so dense at times, and it infuriated me that she didn’t react at all to what was happening around her. This changed quickly, however, when she meets Julian, and her life is altered dramatically. Her character development was amazing: from dense and annoying to selfless and smart. I definitely liked her much more towards the end of the book.  Julian was also greatly developed, and I loved that Lissa’s story in this book wasn’t the main one. We also see the story from Julian’s, Rowan’s, Dena’s, Slate’s and Rhea’s side. Hafsah made each character 3-dimensional and easily relatable.

I’m going to deviate from the story a bit just to swoon for a while. Julian is perfection. He’s sweet, protective, loyal, and GORGEOUS. I shipped him with Lissa so much that I was waaaay too emotionally invested for my own good. I also have to say that Rowan is the antagonist in this story, but so DELICIOUSLY EVIL. My God, that boy and his wonderful eyes should not be anywhere near me… sigh.

Okay…. Getting back to the review.  The world building was great! I’m really picky with it comes to this, so when I read that this was going to be set in another planet, well I was afraid. Thankfully Hafsah did a great job in delivering a very believable life in another planet, while simultaneously making it “difficult” to live in said planet as well.

Do you know what else I liked? The romance!

At first, it’s obvious that this is bordering on insta-love, but I didn’t mind it because Julian is so adorable and the romance was strongly built. Simple little gestures from Julian solidified my hardcore love for these two; each time someone got in the way of that, I audibly groaned and threatened to throw my kindle against a wall.

“Lissa?” He says, opening the door to my room again. “You’re safe here. I won’t let anyone hurt you.”
“You can’t always be here,” I say.
His eyes hold mine, dark and penetrating. “I will. Always.”
-Unbreathable by Hafsah Laziaf

Now, let’s talk about what I didn’t enjoy: I think the only aspect I didn’t enjoy was that there were some great potential plot twists that could have been revealed in a truly awesome way, but were just revealed with no build-up. Nevertheless, I understand and respect why and how the plot twists were revealed because it would have slowed down the story, and I liked the pacing just the way it is.

Nevertheless, I still enjoyed this book very much and would recommend it to anyone who loves romance in their books and a believable sci-fi premise.

The ending wrapped up everything nicely, so the book could be a stand-alone, but I’m hoping to see more from this story in the future.

My dream cast (because I just couldn’t help it!):

When it comes to sci-fi books I’m a bit hesitant because not everyone can pull it off in a believable way, even less when it involves A LOT of world building. But in this book the author has outdone herself. Any doubts I had of the book were brushed completely once I began it.

Lissa has one more thing left in her life after her dad is killed, Earth, and the mysterious knowledge that she can somehow breath Jutaire’s toxic air. 150 years ago humans left Earth because of it being no longer good to sustain life, taking as their new home Jutaire with it’s own species, the Jute. While it is unknown what is of the Jute and their whereabouts, humans are slowly dying with nothing to strive for, except for the small hope of Earth. Lissa wants to make that spark bigger on everyone, but there’s one problem. Her dad died for trying to spread those wonderful news. When Lissa is met with Julian, someone who can also breath Jutaire’s air, they both discover how special Lissa really is and how she is the key to the survival of both species, specially since the Jute are also planning on taking Earth for their own only. Between lies, uncovered truth, passionate and sweet romance, Lissa’s life takes a whole twist in the unknown that can cost her life and the ones from the people she most loves.

I loved the world building of the story. It was really easy for me to imagine this story in another planet than Earth and how everything worked out. It was well developed and easy to grasp. The plot was really original and had my mind being bewildered at what was happening and how everything was solved in the end. Furthermore, the author’s writing style made it simple and easy to read without making my head pound with unnecessary descriptions or informational-dumps.

Now, there are times in a story when you just hate the usual cliche moments, overly used concepts, or even insta-love. Here I had no complains about it to be honest. It was delivered in such a strong and loveable way that I couldn’t hate it no matter what. There are times when you simply WANT the insta-love to happen, and this in a great example of it. Though, as much as I was constantly wanting Julian and Lissa to kiss because it was obvious they both felt something, the story is stretched out in that aspect so that we can see how they both develop as characters and their love isn’t a kid’s thing but something deep, swoony, romantic, and strong against all odds. I shipped those two so hard, I was at the border of crying various times when things just didn’t go my way.

As my friend Marianne said, I didn’t like Lissa either, at least at first. There was something annoying about her and whinny that I simply didn’t like, but at the end loved because it was necessary for me to see how she slowly begins to change for what is needed of her. By the end she’s no longer the dumb little girl who had lost her dad. She was a *censor* ops sorry no spoilers. Ok she was really responsible and selfless in the end, doing not what everyone expected of her, but what she felt was her duty as a living being who cared about everyone first before herself. Those little details are the one who made her a strong heroine in the end, the kind I love with the right amount of romance to throw in, plus adding Julian… :O

Julian is… perfect. He’s caring, protective, vulnerable, selfless, romantic, and completely swoony. Which frustrates me because where are the men on this Earth that are like that? Are they hiding under a rock? Under the sea? Jutaire? Give me some Julian!

Ahem. Yeah. Okay so the rest of the characters in the story felt well developed so  have no complains on that. I loved how one moment you thought something of someone and then BAM surprise not like you thought so because their true colors are these. The villains were wonderful. Queen Rhea just plainly frustrated me and had me wanting to strangle her every second of the book she was present.

And so was Rowan for lots of reasons. But I can’t totally say I hated him because he was misunderstood quite a lot (not excusing his bad behavior) and was loveable. He is, after all, Julian’s *censor* Ok he’s related to Julian in a way I won’t spoil, and those two are simply too much for one girl…

In general, the book was amazing and was much more than I expected from the description. My one and only problem was that in the book we are presented a lot of great plot twist, but they lacked more tension building as to make me be really surprised. Because of that, some things ended being predictable. After some pondering, I think it was for the best because if more things were added then maybe the story might have felt dragged on. Either this or that, because in truth no story is truly perfect.  I forgive the author for that.

After reading the book I am so full of questions for what might come next! Maybe there are some other survivors who remained on the ruined planet. Maybe there are other aliens. Maybe they all die in space and there’s no more story! :O Okay so maybe that’s a bit dramatic, but you get my drift. So many maybe’s…

I really recommend this book to all sci-fi lovers and hopeless romantics. It is a great and fast read that’ll have you restless for more.