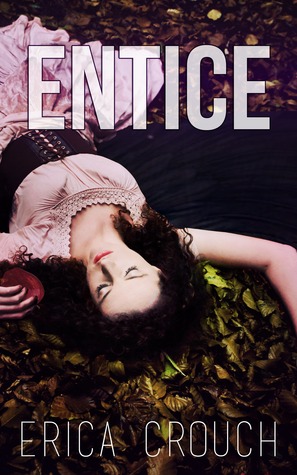 Goodreads Summary: With the aftertaste of Heaven still strong, Pen and Azael cloak themselves in their new demonic destinies, fighting for Lucifer against the angels. Pen, warring against former friends turned vengeful enemies, still struggles with defecting to Hell. But in one short battle, they go from forgotten to famous, thrust into the spotlight where she has no room for uncertainty.

Suddenly top-tiered demons, they’re tasked with seeing through hell’s new agenda: corrupting man. But tarnishing Eden isn’t as simple as they thought it would be, especially when they’re forced to work with another team of demons who are trying to claw their way up the ladder of power.

Entice is an e-novella that prequels Pen and Azael’s story in Ignite.

If I hadn’t said it before, I will now: Penemuel is such a kickass character! She’s determined, brave and steadfast in her mission to protect her brother. She will do anything and go to any lenghts so that her brother is safe, no matter the cost. I loved this about her. Azael doesn’t even realize how much Pen does for him, and yet she continues protecting him.

I love Azael. Even if Az is the most terrifying person in the world when he’s pissed off, I know that I have a soft spot in my heart for him. He’s just ultimately lost and trying to do what he thinks will make him more powerful/respected. Az definitely has a wonderful relationship with his sister, and I’m sure that even if he doesn’t say it, if something happened to her he would be destroyed.

I remember complaining that Ignite had little character growth, but in this book Pen really comes out of her shell! (This is a bit ironic considering the fact that this is a prequel… Moving on!) We feel her inner struggle at still wanting to redeem herself for her past crimes, but at the same time does not want to be denied of what she thinks is right. Here we understand her much better than we did in Ignite.

“In my mind, I turn to paper that I can bend and crease over and over into the shape of a warrier I’m now supposed to be.”
–Entice by Erica Crouch

I also love the way that this story developed. The way that the book ends is obvious from the beginning, but seeing it unfold definitely brought a new twist to the story we thought we knew.

Overall, once I started this book there was no way I could stop reading until I finished it. This has fueled my desire for Incite and has restored my faith in angel-themed books. If you’re hesitant to read this series, you should definitely pick this book up.