Permanent Ink had so many great things going for it.

First off we have Poe, 23 years old and with no real direction in his life. He lives in the basement of his dad’s house, and keeps getting picked up by the police for “vadalizing” a.k.a. grafitti. His dad is fed up with him. Enter, Jericho, 40 years old, and Poe’s dad’s best friend. Jericho gives Poe a job at his tattoo shop as his intern, but things get heated when Poe makes it clear he’s attracted to Jericho.

At first I really didn’t see how they would fall for each other. Not because of the age-gap, but because they were so vastly different from each other, and Poe seemed so… immature. However, the book is incredible in character development from both Poe and Jericho. We see Poe transform from irresponsible and aimless to dedicated and mature. While we see Jericho soften up and become a better person for both Poe and himself.

“I wanted to touch him so bad it was as if my hands had turned to iron and his skin had suddenly been magnetized. It felt like a fucking compulsion.”

The romance between them was angsty at first, because of the 17 year age gap, and Jericho not wanting to hit on his best friend’s son, but you can practically feel the chemistry between them. Poe was sassy and snarky, while Jericho was defensive and stern. Poe has a daddy kink, and it was great to see the nuance with which the authors managed it. Because of Jericho being both older and Poe’s boss, we see an interesting power dynamic; I’m glad it was addressed in text.

The tattoo shop aspects were so good! I learned so much about the process of it all, but I also kind of fell in love with tattoos? I loved the process behind it, plus since Poe was learning, it felt like we were learning as well, and it was so cool to read about.

The only thing I wish I could’ve seen more of is the romance between Jericho and Poe. I wanted to see more moments of them together and why they fell for each other, other than being told the things they did.  The sexy moments were all great and sexy, but I wanted to see *more*. However, I was so invested in this book and the characters, that this slight thing didn’t detract from my enjoyment of the book itself.

I am actually really excited for the next book in the series, since I loved the characters so much! Piper & Avon are an awesome writing duo, so I highly recommend you read anything they write!

If you thought my review was helpful, please consider voting for it on Amazon or Goodreads 🙂 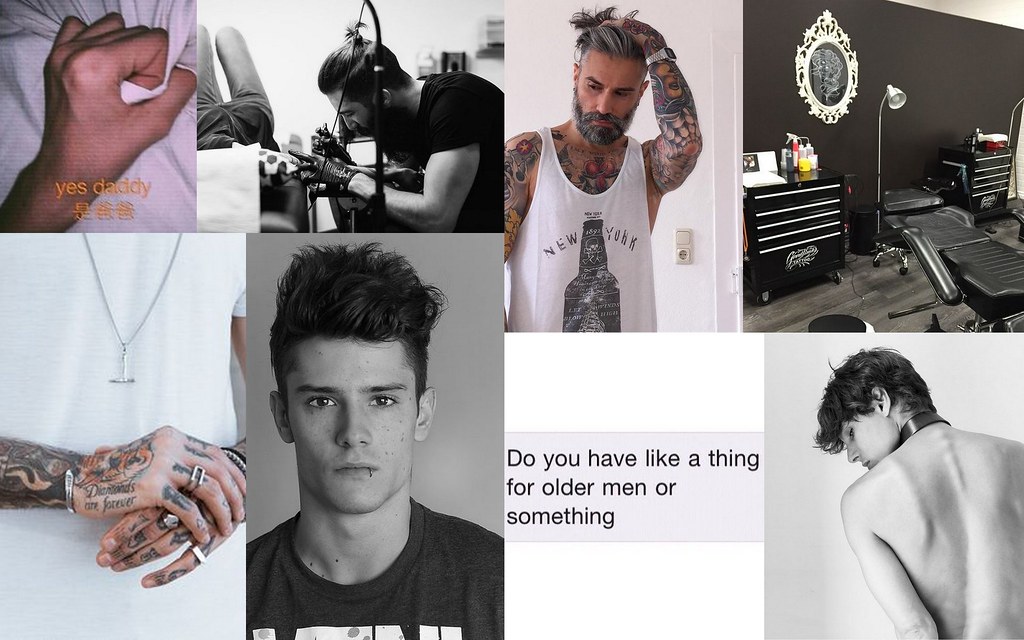 I took another pull from my beer, letting my tongue linger on the lip of the bottle.

Jericho’s eyes darkened. He stared for a second before making a noticeable effort to tear his attention away. His gaze slid to the side, and his brows knitted together. I wouldn’t let him ignore me, though. I stepped closer, invading his personal space, and he met my stare again.

“That means a lot coming from you. I know how good you are.” I meant the words, even if my motivation for saying them wasn’t entirely pure. I smiled at him, peering up through the dark fall of my hair, letting my interest show.

I wanted to touch him so bad it was as if my hands had turned to iron and his skin had suddenly been magnetized. It felt like a fucking compulsion.

Without thinking, I kissed him.

Jericho froze at the contact. But I surged forward, crowding him back against the counter and licking at the seam of his lips, inviting his tongue out to play. Jericho gave into me with a quiet sound, a muffled groan that made my cock stiffen.

I got enough of his taste to make me crave more, enough time to think “hell yeah” and start to consider humping his hard thigh—before a loud, shattering noise broke the silence and made us jump apart.

I realized I’d dropped the beer bottle and a puddle of golden liquid was spreading across the linoleum at our feet. “Oh shit.”

Jericho stared at me, his mouth still wet from mine. “Fuck.” His gaze went from me to the broken glass on the floor. “Fuck. That should not have happened.” He snatched the roll of paper towels from the holder on the counter and started spreading a few on the floor to sop up the beer.

I watched him, trying to swallow past the sudden tightness in my throat. He was so focused on the mess it was obvious he didn’t want to look at me.

“I’ll go get the cleaning stuff,” I announced.

Jericho’s jerky nod was my only answer.

I went to the small utility closet across the hall and briefly thudded my forehead against the wood.

I hoped I hadn’t just fucked up my apprenticeship.

I hoped I hadn’t made things super fucking awkward.

And more than that, in spite of knowing it was probably wrong to want him—he was my boss, my mentor, my dad’s best friend—I wished I hadn’t dropped that stupid bottle.