Title: What I Leave Behind 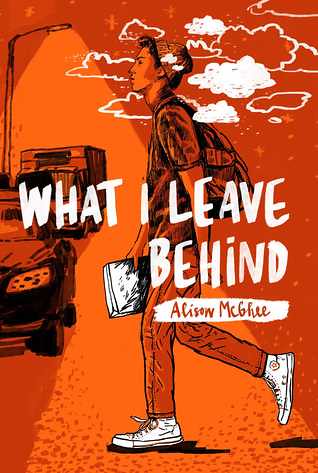 After his dad commits suicide, Will tries to overcome his own misery by secretly helping the people around him in this story made up of one hundred chapters of one hundred words each.

Sixteen-year-old Will spends most of his days the same way: Working at the Dollar Only store, trying to replicate his late father’s famous cornbread recipe, and walking the streets of Los Angeles. Will started walking after his father committed suicide, and three years later he hasn’t stopped. But there are some places Will can’t walk by: The blessings store with the chest of 100 Chinese blessings in the back, the bridge on Fourth Street where his father died, and his childhood friend Playa’s house.

When Will learns Playa was raped at a party—a party he was at, where he saw Playa, and where he believes he could have stopped the worst from happening if he hadn’t left early—it spurs Will to stop being complacent in his own sadness and do some good in the world. He begins to leave small gifts for everyone in his life, from Superman the homeless guy he passes on his way to work, to the Little Butterfly Dude he walks by on the way home, to Playa herself. And it is through those acts of kindness that Will is finally able to push past his own trauma and truly begin to live his life again. Oh, and discover the truth about that cornbread.

Normally, I don’t think I’d pick up a book this short, but part of its charm is that. The author tells a deep story in one hundred chapters of one hundred words each. This allowed for a fast read without taking away the deep message and reflection the characters and their actions bring.

Will struggles with the aftermath of his dad’s suicide. He can’t recreate his dad’s famous cornbread from a recipe only he knew. He has been avoiding his childhood friend, Playa for a while now, as well as avoiding other people and things in his life. He just walks and walks and tries to make that perfect cornbread.

The reading of this book reminded me of the modern poetry collections like Milk and Honey, except in prose (I like this one prose style more in all honesty). Deeply poetic and touching, at times I’d find myself smiling while reading on the train or contemplative of Will’s actions. As a Bowie fan, mention of the song Space Oddity, and Kansas’ Carry On My Wayward Son added a nice touch of nostalgia that helps convey that emotion of missing someone and sometimes not being brave enough, but finally taking the courage to do it either way.

Will’s character was the most developed, maybe due to the length of the story, but through him, we were able to see through his eyes the other characters and also appreciate them in their briefness and little things. Sometimes those are the ones even we miss in real life’s interactions.

Overall, this was a surprisingly enjoying book and I look forward to reading more of this author in the future. it will inspire you to pay attention to your surroundings, to the people ad the things and nature, and appreciate them. A definite recommend on this one.

*I received a digital review copy via the Publisher (Simon & Schuster Children’s Publishing) in exchange for an honest and unbiased review. No compensation was received*